This month brings about a new excitement for me each year. The October after Lyra died, I was introduced to the art swaps involving the Day of the Dead theme. And I've loved it every single year, much to the concern and apprehension of most anyone I tell. "Skulls? the Dead?" You know, creepy things. *ha*

As in my previous post, this year involves twenty artists, and I'm already impatiently waiting for my package of art later this month. Patience is not my forte. But I'm thrilled to be a part of such a talented group of creative individuals. :D

Images of my own creation and of the beautiful ones I'll receive later will be put up later in the month.

And this month is commonly known as Breast Cancer Awareness month. Our town does a beautiful job of remembering and raising awareness regarding this particular cancer. I have never experienced breast cancer or a full blown diagnosis of a loved one, but I think on and remember those who have passed on or are currently dealing with this struggle.

But October is also Pregnancy and Infant Loss Awareness Month. There are too many women who have dealt with a miscarriage, struggled through a stillbirth, and painfully remember an infant loss...but are their voices heard? Is there research happening regarding how to prevent the 26,000 stillbirths every year in the United States? The grief that comes after any of these experiences is unique and different, but a common bond for too many women across the globe.

So I think on that, and I think on ways to help raise awareness. I think on the women I've connected with, and speak baby names into our wild Kansas winds...driving their memories around the world, and up into the stars.

Sending love to you all.
Posted by Rachel at 9:17 AM 3 comments:

Day of the Dead heARTist Trade

October is slowly making it's way into my brain, as I see stores put candy and costumes out on the shelves. I was thrilled to see that Kara has initiated her Day of the Dead swap this year, and jumped on the opportunity to participate. Go check it out, and join in!

Labels: Day of the Dead, halloween

I was walking ahead of Simon, clearing the path for him and leading the way as we wandered to more garage sales. Two little kids came walking the other way on the sidewalk, with their mom walking the street. We shared a quick smile and glanced at each other's children. That's all.

Just that one smile is all I know of this woman. This week, she was 34 weeks pregnant and started having contractions. She hemorrhaged, had an emergency c-section, and the baby died. She was rushed to the nearest big city with complications. And we learned she died last night.

I'm sitting here with that knowledge, with the discomfort of it. Trying not to run away. Breathing in and breathing out. Giving L and Simon an extra hug today.

L worked, and is friends with the woman's mother in law, so we may be going to the funeral to support the family in that way.

Some days it's easy. And other days, not so much.

Wishing you all a peaceful week.
Posted by Rachel at 7:44 AM 7 comments:

I crossed the finish line for my first half marathon! 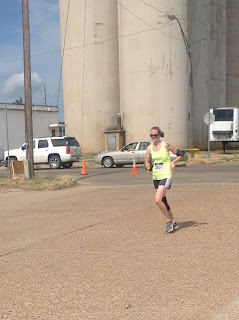 It was not an easy run, and not my best, but I'm proud to be able to say I finished :D
Now to figure out what my next goal will be!

Right Where I Am 2013: Three years, Five months

I get a text once or twice a week about getting together for a play date. Simon is a few months older than G, and he can say her name now and screams when we drive by their house and don't stop. They get along as well as all toddlers do, and they hold hands occasionally. I try not to fast forward 12 years in my mind, when holding hands is something much more weighty.

G's mom, and I have a blast when we get together, even if it's just trying to tame the chaos that our children are together. We share current town news, upcoming events, and our hard dead baby days. The circumstances aren't similar in any way, until you get to the picking out a baby casket, and how to tend to a grave you no longer can easily go visit because you've moved.

We shared the other day how we watch children the age ours our supposed to be, and try to imagine what ours would look like, or how they'd act. And how it guts us to think on what we're missing. I draw and paint butterflies for her, and she participated in Dia de los Muertos with me back in October.

And I know that if we didn't have each other, the move to this town would be that much harder.
----
When I'm not in charge of a my two year old and the normal responsibilities of running a household, I'm planning my next art project and what my next run will be. I'm surprised to say that running takes up a large chunk of my brain space now. An earlier post described my shame in forgetting a BLM holiday due to my anger in having had to miss a race due to illness. That forgetfulness is unheard of, until this year. I speak about Lyra, and miss her more than ever. But it's not always at the forefront of my thoughts like it used to be. I'm not sure if I can say that's a good thing, or if I feel like I'm losing the hold I had with that grief. I won't ever lose it all the way, if that scenario is accurate.

My running has allowed me breathing space to feel a sense of normalcy again. I'm a part of an online running/athletic community where we encourage, support and ask questions about whatever we're trying to accomplish. There are no politics, no religious questions or thumping, and for the most part, no one divulges much of their personal lives. To everyone there I'm just Rachel, a newbie runner who dabbles in strength training and crossfit. I've lost four toenails, my knee has been injured, and I had to miss my first half marathon due to bronchitis.

And it's kinda nice sometimes to only be known by those things.
---
I'm learning who I am still. Who I am with her gone. And who I am without now feeling I have to tell everyone about her. Who I am as me, and not just me missing her. I suppose the two are synonymous. Just like with live children, you have to figure out who you are, separate from just being "Mom". But it's never questioned that you are still "Mom" and your heart would never love your child(ren) less. So I have to remember the same goes for Lyra, even though I don't have her here with me.

I think it's scary to look back at what we've come through. I don't ever want to go back to that kind of pain and hurt again. I hate thinking of Lyra's death as some catalyst for change that could not have happened otherwise. But the grief and pain and my experience of loving her still caused change. And for the first time in a long time, the hurt is not at the forefront of my thinking.
----
Year One: Right Where I Am: One Year Five months
Year Two: Right Where I Am: Two Years, Five months

Labels: grief, Lyra, Right Where I Am

As my cough continued, and my nose ran on, I thumped around the kitchen. I slammed doors and threw items forcefully in the trash. L looked at me out of the corner of his eye and quietly asked if everything was okay.

And I forgot. I did not change my profile picture on fb. I did not send messages to my fellow BLM's.

All I knew was that I was missing my first half marathon. I had not ran or exercised in two weeks. And my not-cheap, first experience at a half marathon was not happening. The thumping and slamming was my pity party (and it also included a batch of no-bake cookies).

When had I become emotional about non-dead baby things? For three years I've been an advocate for awareness on anything related to miscarriage, stillbirth, infant loss, and infertility. For three years I scoffed at things I felt were unimportant, but that "normal" people deemed important...missing a tv show, work drama, etc.

Part of me wishes I'd been astute enough to plan for this half marathon on IBMD day, so that I could run for me and my fellow mama's. Part of me wonders if I'm losing my touch with the BLM world, and what that means. I'm confused about this new role I have, this new hobby and lifestyle. About who I'm becoming yet.

I hope you felt valued yesterday. I hope you feel valued every day, even if you don't have your baby(s) in your arms. I hope you know that even if I don't write here, I'm still thinking of you all, and of your baby(s). Sending love.
Posted by Rachel at 10:16 AM 5 comments:

"What I Mean When I Say My Daughter Was Stillborn"

This brilliant article is over at Still Standing Magazine...read to understand, to feel less alone, to learn or to continue grieving. Much love.
Posted by Rachel at 12:04 PM 3 comments:

All contents here are original and belong to Curlsofred unless stated otherwise. Please do not copy or reproduce any images or text published on this blog without written permission from Curlsofred at regierdesign(at)gmail(dot)com.